The boys in the UK’s top Take That tribute band ‘Rule The World’ have had a thoroughly successful  5 years in the business and continue to grow from strength to strength.

They have appeared on the Royal Caribbean cruise ship the Independence of the Seas performing to over eight thousand people per cruise! They have also had the amazing experience of performing on ITV1′s Daybreak in which they were asked to perform for a top Take That fan!

They’ve had such great feedback from influential people in the music and entertainment industry including Denise Van Oughton who commented saying “you guys were great,  H from Steps who called Rule The World “The best tribute I have ever seen”, and Ricky Tomlinson who said “a great show lads”. They were delighted to see Jason Orange’s mum in the queue of one of their signings after their show at the Manchester Palace Theatre. She was very complimentary and told them it was just like watching her son and the boys on the stage! She was highly impressed with level of detail ‘Rule The World’ have put into their Take That tribute show and told them she was going to ring her son and tell him all about the amazing night she had spend watching the band!

Of course one of the most amazing pieces of feedback came from Twitter when the Take That tribute band decided to send the real Mr Gary Barlow a link to their promotional video and asked him the question ‘Do you think we’re a good Take That tribute band?’. His reply came very quickly with the very simple yet amazing response – “Brilliant”. What more accolade could a Take That tribute band require other than the approval of the one and only Gary Barlow himself? And from watching Gary on the X Factor each weekend, we know he doesn’t give our compliments likely!

So with ITV1 in the bag, theatres and cruise ships filled with thousands of cheering audiences and compliments from the likes of Denise Van Oughten and Gary Barlow, our Take That tribute band ‘Rule The World’ continue to “wow” audiences across the globe!

So why not book ‘Rule The World’ today?

If you like ‘Take That’ you will LOVE ‘Rule The World’; the ultimate celebration of the music of Take That in the UK today with a fan base transcending age groups and nationalities alike. Directed and choreographed by Gary Lloyd, fresh from his success with the West End hit ‘Thriller’ this is a spectacular show with amazing dance routines, numerous costume changes and exciting special effects. Adoring fans will be singing and dancing their hearts out within minutes and left with little doubt that they are watching “The Greatest Boy Band Of All Time”. 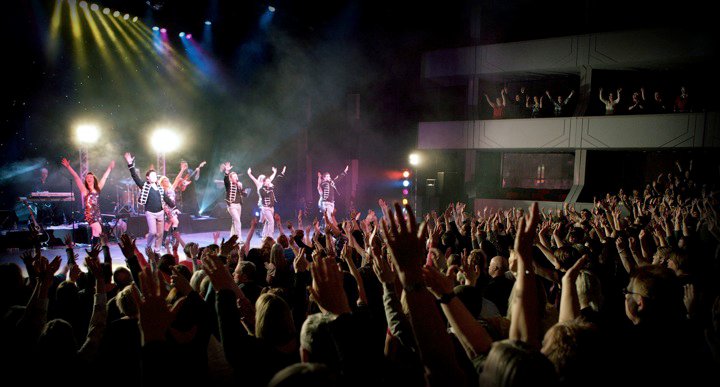 Featuring a feast of your infectious feel-good favourites, old and new, such as ‘The Flood’, ‘SOS’, ‘Rock DJ’, ‘Hold Up A Light’, ‘Rule The World’, ‘Greatest Day’, ‘Relight My Fire’, ‘Never Forget’, ‘Angels’, ‘Everything Changes’, ‘Shine’ to the heart warming ‘Babe’, ‘Patience’, ‘Said It All’, ‘Love Ain’t Here Anymore’ and ‘A Million Love Songs’ you will be putting your hands together to ‘Pray’ that boys are truly ‘Back For Good’!

And don’t just take our (or Gary Barlow’s) word for it! Here’s is what our audience’s have to say about our Take That tribute show ‘Rule The World’:

“The atmosphere is out of this world. For those of you who may be thinking about going to see them don’t just think about it, do it, you will love it!!!”

“Wow… just brilliant… these boys are SO like the real lads!”

“This show was brilliant. Close your eyes and you would have thought it was the real deal”

“What a night!… can’t believe how close to the real guys these boys are!… what a wonderful show that I highly recommend!”

“WOW! What can I say about this show? This is the 8th time I’ve seen it and it just gets better and better… the most talented bunch of guys I have ever had the pleasure of seeing and meeting…  100% spot on with vocals, mannerisms and even accents… they even have Robbie joining them for most shows & he is amazing!… would definitely recommend this show even if you’re not a Take That fan!”

“I have seen Rule The World several times now and they are truly fab!… they perform old and new hits including some from the Progress album…They are constantly finding new ways to make the show better & adding new bits in… I would recommend this show and will definitely be seeing it again”

What a fantastic show for the money, they really have studied their characters down to a tee & what a hard working team! It truly is a fantastic show & I will be going to see them again! I would definitely recommend this for a girls night out!”

Fantastic voices, great entertainment & so much fun made for an amazing girls night out. Everyone on stage worked so hard to make sure we, the audience had the best night possible and it showed. Everyone was up singing and dancing. Couldn’t recommend this show highly enough! Great for all ages and groups. If you just want to lose yourself for a couple of hours with some very talented performers, dancers and people committed to showing you a top time this is the show for you.

Absolutely fabulous!… This is a must see show! Sooo entertaining. One of the best shows I have seen!”.