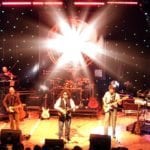 The tribute was formed along side original music whilst working with ELO/Queen Engineer/Producer Mack.  All band members are huge fans of ELO and meticulously made an effort to recreate orchestrations and subtleties to bring you an amazing night Classic tunes.

ELO were a massive progressive rock group formed in the early 70’s by inspirational songwriter Jeff Lynne. ELO were a perfect fusion of classical strings and rock and roll! ELO were known for their incredible rock songs, hauntingly beautiful ballads, as well as explorations into disco!

COME AND BASK IN THE EXPLOSIVE LIGHT!

“Musicianship and vocals are out of this world, with hit after hit!  Definitely the best ELO tribute out there!” Chris Evans.  London

“The Crowd were bouncing and singing along!  The Atmosphere was ELECTRIC!  Pure Brilliance!”  Zoe Hinks.  The Birmingham Roadhouse