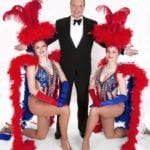 Before becoming known as “David as Frank Sinatra”, David’s long career in the entertainment business started at London’s prestigious Italia Conti Academy of Music & Dramatic Arts, where he trained for three years. This prepared him for a future performing!

David also appeared in various pantomimes throughout the country, television appearances include ‘Lovejoy’ and ‘Inspector Allan’ for BBC and most recently ‘Never Never’ for Channel Four.

These acting skills have certainly been useful throughout David’s career as although he is known as a high-quality cabaret performer, it is his unique portrayal and tribute to the legendary Frank Sinatra that has brought him rave reviews around the world and earned him the respect of both his audiences and fellow professionals.

Available as a solo tribute with recorded live backing band, or with a live band. He is also available with a Saxy Sinatra option of Sinatra and solo Sax.

He is one Frank Sinatra tribute act that has to be seen to be believed!

“Alacey seemed to have somehow imbibed the very essence of ‘ole blue eyes’ before coming on stage. His performance was breathtaking – seriously! The tone, the modulation and the rhythm in his voice throughout the evening was genuine Sinatra. His masculine charm was also apparent in his pristine characterisation and it was with effortless charisma he strolled into the audience and sang I’ve Got You Under My Skin while chatting and engaging with the ladies – just like the icon” Sarah Gudgeon, The Edinburgh Herald & Post

“Sinatra is back at The Sands with Count Basie in 1966, as Alacey sings and swings with the style and panache of Ol Blue Eyes in his glorious prime. He sets up the sadness of a loser in the game of love with the saloon song One for My Baby as only a skilled performer who has perhaps experienced the sentiment of Johnny Mercers masterful lyrics can” John Judge, The Daily Telegraph