The figures don’t lie as Bohemian Rhapsody becomes second biggest opening of all time for a music biopic!

After over 10 years of anticipation, the long awaited Queen biopic ‘Bohemian Rhapsody’ took an absolute BATTERING from critics. Whilst the performance of Rami Malek as Freddie Mercury has received the highest plaudits from around the world, the film itself has come under serious scrutiny.

“Like trying to hit that famed high B flat on “Galileo” without a warm-up, ‘Bohemian Rhapsody’ is embarrassingly unprepared to cover the life of its subject — Freddie Mercury. This jumbled take on the legend is squawky, sexless, and shallow, assaulting the senses as it offers little insight or real depth into Mercury or the band he fronted”

Another followed suit with:

“It’s nowhere near as interesting or absorbing as its central figure, and in glossing over the elements of Mercury’s identity and life which are so vital and important to many – his race, sexuality, and the fact he was the first major cultural figure to die of AIDS – Bohemian Rhapsody leaves a sour taste”

It’s fair to say that these two reviews in particular are scathing at best. But not even these bad reviews could stop this film in its tracks though, despite its current rating of 59% on Rotten Tomatoes, the public audiences seem to have taken a completely different stance on the film and have rocketed the film to having the second biggest opening of all time for a music biopic, behind only Straight Outta Compton. 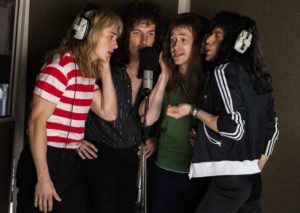 The Queen biopic opened in cinemas in the UK last month and followed in the US last week . On its opening weekend in North America, it took $50 million (£38.3 million), while its international figures totalled $72 million (£55.2 million).

One of the biggest revelations of this film is that despite only showing a snippet of it in the movie itself, the cast have filmed a FULL recreation of the iconic Live Aid concert, that is still to this day regarded as one of the greatest rock concerts of al time- and could be released to the public!

Rami Malek said of the performance:

“That’s when we felt at our best. You need to go from one song to the next to have that same adrenaline rush that they had. We had an audience of Queen fans out there recreating that iconic concert and it’s an adrenaline rush like you could never imagine.” 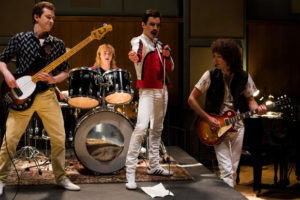 It’s safe to say that after Maleks incredible performance we would love to the full Live Aid recreation, and it would top in our opinion a fantastic film off!!

Here at Tribute Acts Management we absolutely LOVE Queen and as part of the tribute industry, we think the artistry involved of recreating somebody’s movements and voice is simply breath taking and we loved the movie!

If you’re a huge fan of Queen, or Freddie Mercury, then check out our wide range of tribute acts to the Brit legends HERE!