Take That have officially announced that in 2019 they will be back on the road performing a greatest hits tour!

Gary Barlow also confirmed on his Twitter account the boys have been working on a new album of their greatest hits, along with some new songs too!

“There are some exciting announcements coming from TTIII soon. We’ve an extremely important release coming this Winter in the form of a Greatest Hits with a twist. Then in 2019 we will turn our recordings into a live show featuring all the hits from the last 3 decades.” 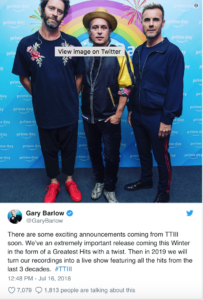 There was even further excitement for fans, as the group’s official twitter account posted a clip from their music video Get ready for it, with the title taking the caption of the tweet followed by a spade emoji. 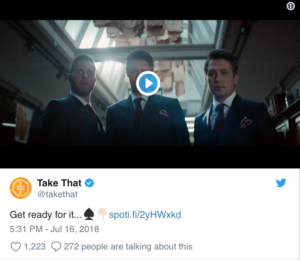 After Gary Barlow’s solo tour, the band returned as a III for the first time last Saturday at Hits Radio Live at Manchester Arena! The band spoke with Sarah-Jane Crawford before their show and said;

The trio raised the roof with a show that that included some of their biggest hits, including; Greatest Day, Rule the World, Back For Good and Never Forget.

Fans will be itching with excitement right now but despite the rumours that have been floating around for a while, the specific use of #TTIII suggests the tour will be going ahead as the current up, and Barlow, Owen and Donald will not be joined by Robbie Williams and Jason Orange, which will no doubt leave fans slightly disappointed!

They won’t be sad for long however as the imminent scramble for tickets will no doubt begin shortly. Take That have a history of selling out tours in an incredibly short space of time so fans will have to have their laptops and hands at the ready if they want to get their hands on tickets for the iconic hits tour!

Take That always put on a huge spectacle and after the use of huge robotic elephants, giant robotic men, magic carpets etc. fans will be buzzing with excitement to see what the boys come up with next! 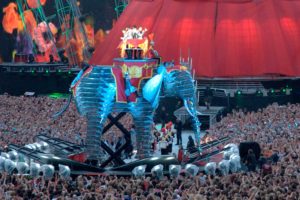 If you’re looking for a Take That Tribute bands for your next big event, then check out our full range of them HERE !