“We’re about equality and bringing everyone together”

The days of ‘Girl Power’ are over for the Spice Girls as they prepare to embark on their sell out UK comeback tour.

The iconic girl group have change their famous saying to “People Power” to spread a message of equality across the world. Emma Bunton, a.k.a ‘Baby Spice’ told The Sun;

“It’s people power. We’re all about equality and bringing people together”.

The girl group officially announced their return last week for a string of UK Stadium dates that will be headlined at the famous Wembley Stadium. Victoria Beckham however has opted out of the reunion tour. She has however publicly wished the girls well and insisted they are still friends. 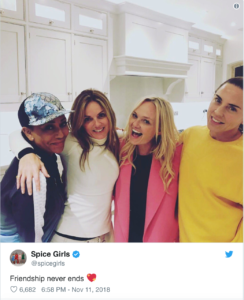 The long anticipated reunion sold out in a matter of hours, but many were left frustrated amid reported site crashes, error messages and long queue times online as they attempted to get their tickets.

Extra dates were however added to the reunion after fans vented their frustrations.

We absolutely love that the Spice Girls are finally touring again and can’t wait to see one of the shows!! If you missed out on tickets, why not book the next best thing in our fantastic tribute act, The Spice Girlz!!