Last week was a very exciting week for our fantastic Robbie Williams tribute act as he had the honour of introducing the real Gary Barlow onto stage. 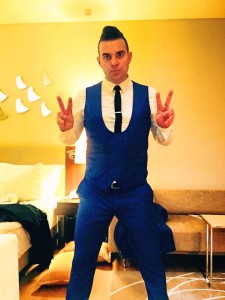 Tony who has performed successfully as a Robbie Williams tribute act for more than 12 years has had many career highlights. He finished third place in the BBC1 talent competition ‘The One & Only’ judge by David and Carrie Grant and presented by Graham Norton. He also had the ultimate achievement that all tribute acts want – meeting the man himself Mr Robbie Williams.

Tony found Robbie to be very down to earth as they spoke about pretty down to earth things such as girls and football. Robbie said about Tony “It’s great. I’m very flattered. It’s bloody hard work being me!” 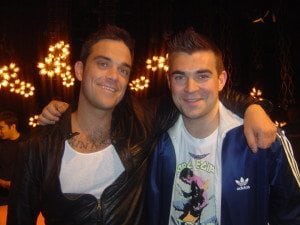 But last week proved to be another career highlight for the Robbie Williams tribute act as her performed at a wedding of a huge Take That and Robbie fan. Tony as in on the surprise for months that Gary would be turning up at the wedding but had to keep it quiet.

But when Tony finished his last number, Barlow walked on to the dance floor, belting out Take That’s 2006 hit Rule The World, to the complete shock of the wedding party.

The bride said: “The real Gary Barlow walked in, and I just couldn’t believe it.

“It was just the icing on the cake – I was speechless.”

The 33-year-old has been a Take That fan since she was eight, seeing the group and Williams perform many times.

She even has the names of the original band members tattooed on her arm. 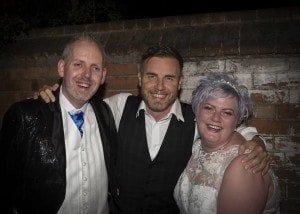 Book our fantastic Robbie Williams tribute act and you can ask him all about his experience with the real Gary Barlow (or Robbie) yourself! Call 0845 094 2569 or email info@tributeactsmanagement.com today!