Jaden Smith had made music history by becoming the first artist to release an album through the photo- sharing app ‘Instagram’!

Smith celebrated his 20th birthday in style be re-releasing a revamped version of his album ‘Syre’ that was named ‘Syre- The Electric Album’ due to the ‘electric’ re-working of the tracks.

The tracks are all video clips on Jaden’s Instagram and when they’re all combined on his feed, they make up a fairly ambitious set of album artworks. 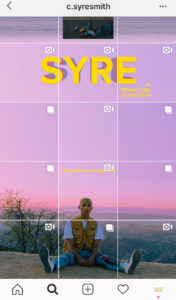 Meanwhile, Will Smith has also re-released one of Jaden’s tracks adding a verse of his own! In true dad style he used the verse to create some friendly father-son rivalry by using the lyric ‘boy you know why you is an icon living? You was born from an icon living.”

What do you guys think? Is Instagram ready to make it’s big takeover?!

Don’t forget, you can follows us on instagram over on @tributeactsmanagent were you can also view any videos on our Instagram TV channel!!