Interview with The Take That tribute band stars

This week we caught up with two of the stars behind the hugely successful Take That tribute band ‘Rule The World’. We spoke to the men behind Gary Barlow and Howard Donald to ask them what it’s like being in a tribute band to the biggest man band in the UK and learn a little more about the guys! Dan Maines potrays Gary and Gabriel play the part of Howard. Here’s what they had to tell us!

Q.  What attracted you to the idea of being in a Take That tribute band as opposed to a different band?
Gabriel: Quite simply, they have written some of the most enduring, appealing, creative and melodious masterpieces in the pop                 firmament in the last 20 years: what’s not to like?
Dan: I love Take Thats music! And I truly believe they are the best band this country has produced since The Beatles.
Q.  What is your favorite song by this act?
Gabriel: Hmmm…that’s a difficult one but I’m going to plumb for ‘Beautiful World’.
Dan: Mine would have to be ‘Rule The World’. Just as well since it’s our band name! 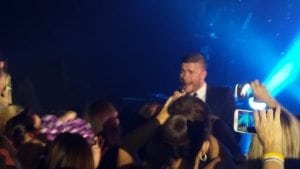 Q. When and how did you realize you sounded like this tribute act?
Gabriel: well I actually joined the act once it was already established and knew full well from social media and promotional material that there was no question in that regard already, so my personal challenge was to fit right in. Frankly, my head’s still spinning from the enthusiasm and support we get from Take That fans especially – they know their product so it’s their responses that assure me we’re doing something right.
Dan: For me it was back in 2007, I went as moral support to an audition for a Take That tribute band for a friend, after he did his audition the manager turned to me and asked if I could sing, I said I could a little bit so he asked if I’d like to audition, 1 minute into the song he stopped me and said….. “You’re my Gary Barlow!!”
Q. What is the reaction when you sing as this act?
Dan: Amazing! People really do treat us like the real thing sometimes, though I think the alcohol they consume may have something to do with this!!
Gabriel: Amazing.  ’nuff said!
Q. What is your home life like? Do you live live real popstars off stage?
Dan: Absolutely not! It’s all very simple and quite. How I like it. I live with my fiancé Vicki, we have two dogs and a Horse which means no lie ins for us!! It’s a lovely happy home!
Gabriel: Nestled in amongst a throng of students, take-aways, neighbours’ cats and the occasional artists, I live a comparatively                 quiet life in an inner-city through-terrace in Leeds.
Q. Aside from being in a Take That tribute band and touring the world. What are your other hobbies and interests?
Dan: Playing musical instruments, listen to music, writing songs, Football, and walking the dogs! Oh and cars.
Gabriel: I’ve been studying Wing Chun Kung Fu for some 4+ years now and cannot recommend it enough. Other than that, I keep a look-out for logical fallacies, both in the media and anything written by Richard Dawkins. 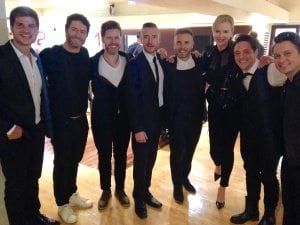 Q. How did it feel to finally meet the real Take That?
Dan: Amazing and terrifying. They were all very lovely, complimentary and down to earth. We got 15 minutes alone with the backstage which was the most surreal feeling. I have to say I was very nervous about singing in front of the real Gary Barlow – and it didn’t help that I had a cold! But I just feel so honoured to have been given the opportunity and will cherish it forever.
Gabriel: Yes as Dan says I think the word is surreal. At the time I’d only been in the band 6 months and it felt like all my Christmases had come at once. I think I decided then as I brushed shoulders with Nicole Kidman, Julie Walters and Gary Barlow that I think this is a job I was happy to stick with!
To book our fantastic Take That tribute band ‘Rule The World’ please call us on 0845 094 2569 or email info@tributeactsmanagement.com