Liam Gallagher has attempted to give Oasis fans what they’ve been wanting for years by calling out his estranged brother Noel on twitter for that long sought after reunion.

The former Oasis frontman sent out a tweet offering an olive branch to his estranged brother, offering total forgiveness and the chance to reform the “Big-O”, with the drinks being on him. 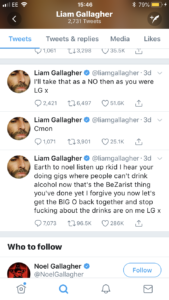 The tweet no doubt whipped Oasis fans into a frenzy as they will have eagerly anticipated Noel’s reply.

However much to their huge disappointment, Liam followed up his offer by tweeting “I’ll take that as a NO then as you were LG x”. The fresh attempt at a reunion went exactly the same way as the previous ones and surely by now fans must be wondering if it is ever going to happen.

This comes after Liam recently blasted Noel for publicly discrediting the England football team. After the huge resurgence of the famous song ‘Three Lions’ and the nation developed ‘It’s coming home fever’, Noel publicy voiced his negativity by saying “No it F****ng isn’t”.

Liam hit out at his ‘miserable’ brother and claimed he jinxed the squad….all a bit much don’t you think?

It seems that for the foreseeable though, some family feuds are beyond fixing and it could be a long time before fans see them share a stage again.

What do you think? Will Oasis ever give it another go? Or are they gone for good?

Let us know in the comments!

Here at Tribute Acts Management we have plenty of amazing tribute acts to Oasis, so if you need a live Oasis fix, check out our range of acts HERE!