HMV has been brought back from the brink of collapse after a bid from a Canadian music entrepreneur was accepted! It’s not all good news however, as despite the buy, HMV will be closing down 27 of its retail stores, including the site of its very first store on Oxford Street in London.

Doug Putman, who runs Canadina retailer, Sunrise Records, made the buy after it emerged that he was the front runner for the deal ahead of infamous Sports Direct and Newcastle United owner, Mike Ashley. The deal states that 100 HMV stores across the UK will remain open, saving nearly 1,500 jobs in the stores and head office. However, the immediate closure of 27 stores, will result in the loss of 455 in-store jobs, and a further 122 jobs in their packing warehouses. The closure of their flagship store marks the end of HMV’s presence on England’s most famous shopping street, after almost a century. That first store was opened by British composer, Sir Edward Elgar in 1921. Other large HMV stores set to shut down are Manchester’s Trafford Centre, Sheffield’s Meadowhall, Westfiel in London and the Bluewater shopping centre in Kent. 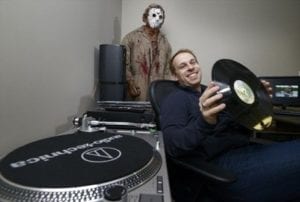 The company fell into administration just after Christmas last year, blaming the almost unassailable competition from streaming sites such as Netflix, and Spotify. Sales of physical music, games and video products in the UK fell by 11.4% last year, led by a near 17% slide in sales of DVDs and other physical film formats.New owner Doug Putman wants to recreate Sunrise Records’ success in Canada after they took over nearly 70 HMV sites, after they went bust over there in 2017. That business is now profitable and increasing sales year on year.

Don’t get us wrong, we all use streaming sites daily to watch a film or listen to music on the way to work, but there’s nothing quite like the feeling of going into a store and buying a hard copy of an album!

What do you guys think? Will HMV come through the other side? Or have streaming sites taken over for good? Let us know!