If you’re a Little Mix fan…it’s time to get excited!! The band have very nearly finished recording their new album! 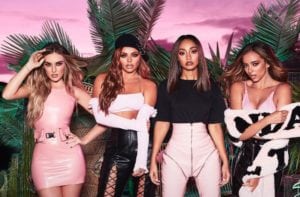 The girls have been hard at work in the studio producing the follow up to their smash-hit 2016 album Glory Days! The impending completion of the album was confirmed by Jade Thirlwall who posted a snap too her Instagram with the caption “Two more recording days left”.

The post-production can take months but it is definitely a good time for fans to get excited!

The band haven’t released any official details as of yet but the band have been dropping hints everywhere of what type of themes might appear on the album!

This update comes after earlier this year, Leigh-Anne confirmed the album would be out this year and would be followed by a tour!

Speaking in March, she said: ‘So we’ve got the new album coming out this year which is really exciting”

‘We start writing it… basically, March, when we get back to work. Then the tour will follow the following year. Basically, we’ve got our lives planned out for the next two years, but it’s great.’ She added: ‘[It’s] more of the same in the sense that we love inspiring people with our music. That’s what we do. Definitely more girl power. Definitely more of that sort of inspirational message that we love to do.’

Here at Tribute Acts Management, we are MASSIVE Litte Mix fans and we can not WAIT for the new album! If you can’t wait until the end of the year for your Little Fix, check out our amazing Little Mix tribute acts HERE!