The phenomenal One Love Manchester concert, organised by Ariana Grande to honour and raise funds for victims of the tragic Manchester attack was joined by Brit band Coldplay who decided to sing one of the most famous songs by Mancunian group Oasis “Don’t Look Back In Anger”.

Crowds broke into a rendition of the 1996 hit during a minutes silence for the victims of the attack in May.

50’000 people turned up for the concert at Old Trafford Cricket ground in Manchester and Coldplay performed hit songs “Fix You” and “Viva La Vida” and even joined Liam Gallagher on stage for his surprise performance. 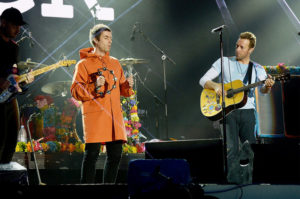 Since the concert our spectacular Coldplay tributes

have had plenty of enquiries and are playing at some outdoor festivals to replicate the One Love Manchester concert.