Rami Malek has dedicated his best actor award at the Golden Globes to ‘gorgeous’ Freddie Mercury.

It was a line-up of A List nominees that would’ve made any relative newcomer nervous at the 2019 Golden Globes. Bradley Cooper, Willem Dafoe, Lucas Hedges and John David Washington. The talent in those 4 names is of the highest standard. But one name shone above all those at the Golden Globes. Rami Malek.

Bohemian Rhapsody is a film that received widespread criticism upon its release, but there was one saving grace in every review, and that was the performance of Rami Malek as Freddie Mercury. Malek was simply breath taking. His mannerisms, voice, posture movement and everything about his being oozed Freddie. The amount of hard work and dedication he had given to this role was evident, and his victory at the Golden Globes, claiming ‘Best actor’ comes as no surprise to anyone.

Sure, Bradley Cooper was outstanding in ‘A Star is Born’ and was probably a close second, but Malek was simply in another league in Bohemian Rhapsody.

“I got goose bumps because he just embodied him so perfectly. It was a crazy thing to know someone so well and just be who are you?” he said.”

Malek said he was “beyond moved” to have won the award, thanked Queen legends Brian May and Roger Taylor for “for ensuring that authenticity and inclusivity exists in music and in the world and all of us.” 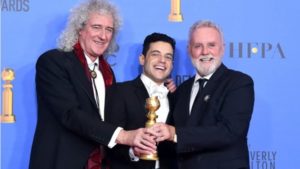 He dedicated the award to the late Freddie Mercury in his acceptance speech, saying;

“Thank you to Freddie Mercury for giving me the joy of a lifetime,” he continued. “I love you, you beautiful man. This is for and because of you, gorgeous.” 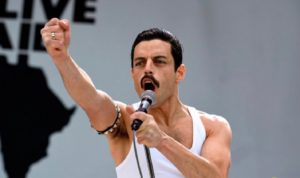 Malek was joined moments later on stage by his cast mates as Bohemian Rhapsody won ‘Best motion-picture drama’.  This one was a surprising win considering the initial reviews for the film, but that will no doubt make the victory all the sweeter for the cast and creatives.

A Star is Born was tipped to be the big winner of the night but fell surprisingly short and only took away one award which was ‘Best Original Song’ for Shallow.This shouldn’t take away from how truly amazing this film was, and it is certainly not a defeat losing to Bohemian Rhapsody. 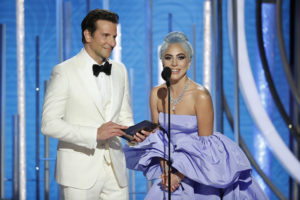 Here at Tribute Acts Management, we are HUGE Queen fans and we are delighted that Bohemian Rhapsody has got the plaudits it deserves! That being said we also love Lady Gaga and a Star is Born is a phenomenal display of song writing, and acting through singing.

If you’re also a fan of Queen and Lady Gaga, check out our amazing tribute acts to them HERE! Our Lady Gaga act Donna Marie recently appeared on BBC One’s ‘All Together Now’ Series 1 with Spice Girl, Geri Horner, and is due to appear on Series 2 this year!!