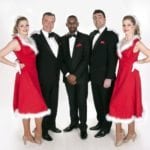 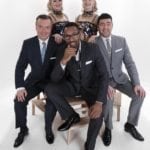 In 2016 the hit show “The Rat Pack” was voted the number one Rat Pack tribute show in the UK by The National Agents Association of Great Britain at The National Tribute Awards for the second successive time.

The Rat Pack perfectly captures not only the wonderful music and comedy of the original legends, but also the remarkable personalities of the stars who truly ruled the entertainment world. The Rat Pack is Back is Britain’s longest running tribute to Frank Sinatra, Dean Martin and Sammy Davis Jnr. In 2004 the guys were honoured to perform for HRH The Princess Royal at a Royal Command Performance and then appeared in front of 35,000 people with their Big Band as part of the VE Day celebrations. In 2011 they performed a sell-out show at The Indig02 at the 02 Arena in London.

This outstanding production ‘The Rat Pack’ accurately recreates the legendary performances of the pre-eminent entertainers of their time, together on stage and features Britain’s best tributes to the fabulous originals.
‘The Rat Pack’ includes all of the hit songs made popular by the legendary performers such as “Ain’t That A Kick In The Head”, “The Lady Is A Tramp”, “My Way”, “Mr Bojangles” and of course, ‘New York New York’. These are performed with Amazing Accuracy and to achieve this, the producers found the very best tribute artists for the roles of Frank Sinatra, Dean Martin and Sammy Davis Jnr. These guys not only sing like their heroes, they physically resemble them on stage, share their unique mannerisms and even talk like they are at the Sands taking part in the summit.
Testimonials

“These guys are fantastic” Dannii Minogue