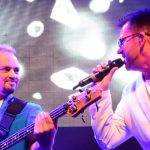 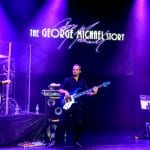 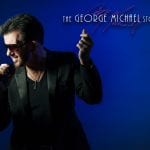 The only touring show to perform George Michael’s hits in chronological order. The George Michael Story tells in detail, the career of George and his 100 million record selling history.

The show starts with George in the Wham! days and then into the Grammy Award winning ‘Faith’ album, through to George’s more mature hits, so touch on some of his emotional and heartfelt songs.

A full live band with video screens supporting the show including video footage of George and interviews with the man himself.

A fun and emotional night culminating in a finale that is guaranteed to surprise & have the audience singing along!!

Expect to be taken on a musical journey of George’s biggest hits celebrating his life and generosity.

5% of ticket sale profits and 20% of merchandise sale profits from this show will be donated to George Michael’s Charities!

IM YOUR MAN
OFF STAGE

A DIFFERENT CORNER
EDGE OF HEAVEN

I KNEW YOU WERE WAITING

ONE MORE TRY
PRAYING FOR TIME

JESUS TO A CHILD

The show lasts 2 hours and 30 Minutes with an interval

Find out more or adjust your settings.