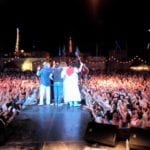 Formed in 2005 after a year in a rehearsal studio, UK Queen is a 5-piece band and has delighted audiences all over the world and has performed at some of the most prestigious events from Hampton Court Palace to Fribourg Festival Switzerland.

More recently UK Queen have returned from a successful 4 week 13 city tour of India and is scheduled to play numerous festivals and events across the UK and Europe. Europe to include Italy, Portugal, Holland, Belgium, Switzerland, Estonia, plus two scheduled return visits to The British Embassy in Kuwait at the request of His Excellency The British Ambassador………. UK Queen are currently working on a 50 date tour in the Uk for next year….

“UK Queen has been very professional both on and off stage and the show they gave was simply massive. Luke (Freddie) did an outstanding job!” Beland Festival, Malta