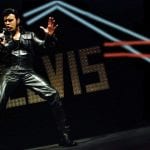 “Darren as Elvis” started performing when he was 17 years old working at a holiday park where he would always do voices of different celebrities, with Elvis going down very well!

Darren has toured many theatres with his production shows “ELVIS: That’s Way It Really Was” & “ELVIS: Through The Years”. Also his Rock & Roll legends tribute shows have proved to be very sucessful.

Darren’s extraordinary talent has seen him labelled within the industry as “The Voice” and once you have heard him you will understand why! Darren is also a fully fledged martial artist, Elvis was a black belt in karate so this truly adds to the authenticity of the moves when Darren performs his Elvis Vegas tribute show. All his suits/costumes are exact replicas right down to the last detail.

Darren has made many TV appearances including ‘The Big Breakfast’ on which he appeared as Elvis. He has also appeared on the ‘Vanessa Show’ and in the ‘Cult Fiction’ adverts which were aired not just on national & international TV but also on cinema trailer adverts just before the feature film.

Darren can be booked as a solo Elvis or with his full band to really make the King of Rock ‘n’ Roll blow your guests away!