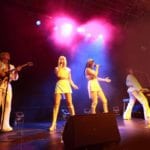 Abba’s Angels, one of the UK’s premier ABBA tribute bands have been established since 2000. Featuring some incredibly talented singers and musicians they offer one of the most captivating and authentic tributes to one of the greatest bands of all time.

They have appeared on BBC & Sky1 TV, featured on Star for a Night, been recommended in the Sun newspaper and on the front cover of a Sunday Times Magazine. Abba’s Angels have even been interviewed on Sky News in front of half a million viewers regarding the rumours of an Abba Reunion!

Abba Tribute Shows are typically either 1 hour or 2 x 45 minute sets with several stunning costume changes and the band comes self contained with a high quality sound system and dazzling stage lighting.The band can also play music before / in between and after the show to save you hiring a separate DJ.

They have performed to audiences up to 10,000 but are equally happy performing at smaller private parties as they are in front of thousands at festivals. Our many satisfied clients include Tesco, Boots, Hilton, Ramada, BBC, RAF and many more.

“Thanks for all your help on Children In Need Night – Abba’s Angels were Brilliant! Same Time next year?” Andy Longstaff, The BBC

Contact Tribute Acts Management to book today to avoid disappointment in the future!