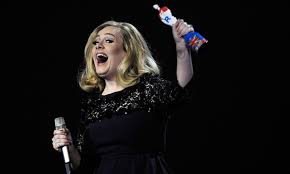 How did Adele come to have such an amazing voice and such strength of character? Here are a few snippets of her early years, where she studied, and some of the awards she has received.

From the age of 2, Adele, (Adele Laurie Blue Adkins MBE (5 May 1988)) was brought up by her mother. She began singing at the age of four and spent most of her time singing rather than reading. At the age of 9, in 1997, she and her mother relocated to Brighton on the south coast of England.

Two years later, they moved back to London; first to Brixton, and then to neighbouring district West Norwood, in south London. West Norwood is the subject for Adele’s first record, “Hometown Glory”, which she wrote and composed in 2004, when she was 16. Adele graduated from the BRIT School for Performing Arts & Technology in Croydon in May 2006, where she was a classmate of Leona Lewis and Jessie J. Adele credits the school with nurturing her talent.

Graduating from the BRIT School for Performing Arts and Technology in 2006, Adele was given a recording contract by XL Recordings after a friend heard her demo on Myspace the same year. In 2007, she received the Brit Awards “Critics’ Choice” award and won the BBC Sound of 2008 poll. Her debut album, 19, was released in 2008 to commercial and critical success. It is certified seven times platinum in the UK, and double platinum in the US. An appearance she made on Saturday Night Live in late 2008 boosted her career in the US. At the 51st Annual Grammy Awards in 2009, Adele received the awards for Best New Artist and Best Female Pop Vocal Performance.

In early 2011, Adele released her second album earning her several awards including six Grammy Awards which included Album of the Year; two Brit Awards, including British Album of the Year, and three American Music Awards. The album has been certified 16 times platinum in the UK, and is the fourth best-selling album in the UK of all time. In the US it has held the top position longer than any album since 1985, and is certified Diamond. The album has sold 31 million copies worldwide.
At the 2012 Ivor Novello Awards in May, Adele was named Songwriter of the Year, and “Rolling in the Deep” won the award for Most Performed Work of 2011. At the 2012 BMI Awards held in London in October, Adele won Song of the Year (for “Rolling in the Deep”) in recognition of the song being the most played on US television and radio in 201.

The success of 21 earned Adele numerous mentions in the Guinness Book of World Records. She is the first woman in the history of the Billboard Hot 100 to have three simultaneous top 10 singles as a lead artist, and the first female artist to simultaneously have two albums in the top five of the Billboard 200 and two singles in the top five of the Billboard Hot 100. 21 is the longest-running number one album by a female solo artist in the history of the UK and US Album Charts. In 2012, she released “Skyfall”, which she wrote and recorded for the James Bond film of the same name. The song won an Academy Award, a Grammy Award, and a Golden Globe Award for Best Original Song. On 30 April 2012, a tribute to Adele was held at New York City’s (Le) Poisson Rouge called Broadway Sings Adele, starring various Broadway actors such as Matt Doyle.
In 2013, Adele won the Academy Award for Best Original Song for the James Bond theme “Skyfall”. This is the first James Bond song to win and only the fifth to be nominated (after “For Your Eyes Only” (1981), “Nobody Does It Better” (1977) (from The Spy Who Loved Me), “Live and Let Die” (1973), and “The Look of Love” (1967) (from the original Casino Royale) ]Skyfall” won the Brit Award for Best British Single at the 2013 Brit Awards. 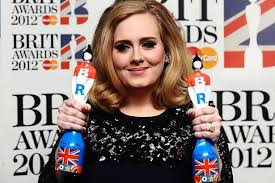 Also in June 2013, Adele was appointed a Member of the Most Excellent Order of the British Empire (MBE) in the Queen’s Birthday Honours list for services to music, and she received the award from Prince Charles at Buckingham Palace on 19 December 2013. In February 2013, she was assessed as one of the 100 most powerful women in the United Kingdom by Woman’s Hour on BBC Radio 4.

After taking a three-year break, Adele released her third studio album, 25, on 20 November 2015. The album debuted at number one in most major markets and broke first week sales records in the UK and US. The lead single, “Hello”, debuted at number one in many countries around the world, and became the first song in the US to sell over one million digital copies within a week of its release.
On 15 January 2016, her sales were estimated at more than 100 million records, making her one of the world’s best-selling artists.