A QUICK REVIEW OF THE LAST FEW WEEKS!

It’s been an absolutely hectic few weeks here at Tribute Acts Management! We’ve had lots of amazing acts that have all been up to their eyes in gigs and have been absolutely smashing it!

Here at Tribute Acts Management, we have hundreds of acts on our books, some of which we manage specifically, so we’re going to take a look at some of the gigs some of our acts have been up to!

A Touch of Little Mix

These girls have really stepped up to the plate! They’ve been bringing in lots and lots of bookings and are one of our most in demand acts!

This last few weeks the girls have had a few HUGE theatre shows and lots and lots of festivals! They’ve been getting a lot of very positive feedback, and their online presence is growing more and more by the day!

They’ve been putting a lot of hours in the studio rehearsing and it is definitely paying dividends! 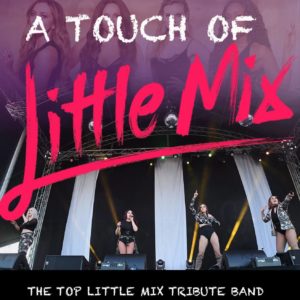 These guys really are top of the tree when it comes to Take That tribute acts and we are so proud to represent them.

For over 10 years now Rule The World have been wowing audiences with their extremely accurate vocals, mannerisms, costumes and their overall recreation of a Take That concert!

This month the boys have had some great gigs, including an amazing night at the York Barbican theatre, with JK as Robbie Williams! The boys really did put on a spectacle and nobody went away disappointed!

This was alongside, festivals, their Butlins contract and lots of other gigs!

The guys are out most nights a week and produce the same quality every night and long may it continue! 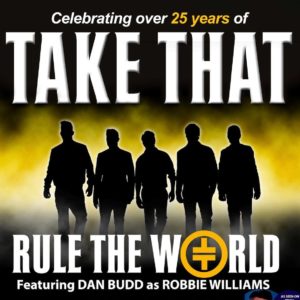 Another Take That tribute, Back For Good have been putting in lots of graft and hard work recently and made some big changes to their show!

They’ve done a serious amount of travelling with a lot of far away gigs but they’ve been getting some brilliant feedback from all over and they won’t be stopping any time soon! They even had a special one off gig where they were requested to go back to the 2011 Circus Tour with the full complete clown medley! A few cobwebs had to be dusted off the break dancing shoes!

They’ve got a huge gig coming up this week with our live band, ‘The Eleventh Hour’ and have been in the rehearsal studio making sure everything is tight and working on some new ideas for their show! 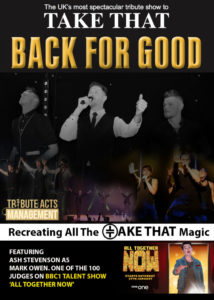 Kieran hasn’t been on the scene long but he is fast becoming one of the most in demand Ed Sheeran tributes in the UK.

Kieran’s show has everything, he has excellent guitar skills, he’s perfected the use of the loop pedal just like Ed Sheeran does! All this coupled with his extremely accurate vocals makes him an excellent act!

We firmly believe that Kieran is the best soundalike out there and we are very lucky to have such a talented act on our books!

Kieran has been very busy and he’s been right up and down the country these last few weeks and covered some serious mileage! We’ve not received a negative comment about him yet which is a testament to his act, his talent and his professionalism!

Keep it up Kieran!

If you’re interested in booking any of these acts, click HERE to find out more information or call 01274675943!